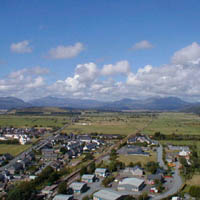 Having discovered Japanese techno artist Tatsu from his wonderful early work on his net.label Bumpfoot, we co-opted him to do an exclusive new EP on Monotonik, and the immensely lush 6-track 'August EP' is the result, showcasing the immensely pure, almost Detroit-tinged pastoral electronica - no tricks, no feints, just a trip back to the classics.

We start with 'Stillness/Introspective Me', which briefly showcases some gorgeous ambience, before moving straight into 'Sky and Sea/Daytime Dream', which sets the agenda - gently building, retro-percussive techno, with claps and hi-hats that sound like they're straight from 1985, but a purity of vision that make things shine. Going on, 'Highland/Glass and Mountains' is just amazing driving music- mechanical, straightahead and oddly almost Robert Miles-like, but avoiding trance cliches on the way to delirium. And so we continue on - 'Evening/Setting Sun' is if anything, even more bliss-like, with more trademark single-key melodies and an unplaceably backwards-looking tint, and 'Deep and Calm/Falling Asleep' works the goodness just a notch further, before 'Memories Of Summer/Goodbye' ends everything out with a gentle fade. More, please.

Reviewer: Gordon Hackman - favoritefavoritefavoritefavorite - July 16, 2006
Subject: Artifical Intelligence influenced techno
If you dig the sounds of early 90s Warp/Artificial Intelligence artists like B12, then you should definitely check this stuff out. It has all the futuristic optimism of that era. The sound here completely reminds me of B12's second album "Time Tourist," from the ethereal urban-future atmospheres, to the electronic bleeps, and the rhythm sounds. An enjoyable slice of melodic, atmospheric nostalgia.

I noticed the cowbell too,. but, sometimes it worked. A very chill "electronica" release, not the norm style of what I've come to expect from Monotonik over the years.. but then again, whats that mean? They've always been kinda all over the place style wise.

"highland / glass and mountains" is indeed a great track, I just wish the other songs were a bit more in the same vein.

i've checked out this musicians stuff at (his?) the netlabel bumpfoot( http://www.archive.org/audio/collection.php?collection=bumpfoot ) and i have to say - one or two tracks being solid is pretty much the standard so far, but this guy has already come a long way since his first release. Someone to definitly keep an eye out for in the future.. and if there's anything Mono has been great at in the past several years is picking people out of the liter before anyone else.
Reviewer: moss.man - favoritefavoritefavorite - September 17, 2005
Subject: I disagree
Good album. Not my favorite MT release by any means but it has a good feel to it. Be patient with track 3, thats my favorite.

Good work.
Reviewer: ExoticAidan - favoritefavorite - September 13, 2005
Subject: Tatsu's August EP
Chill electronic, had potential untill i heard the electronic cowbell, sadley it is throughout, reminds me of elevator music with a beat.